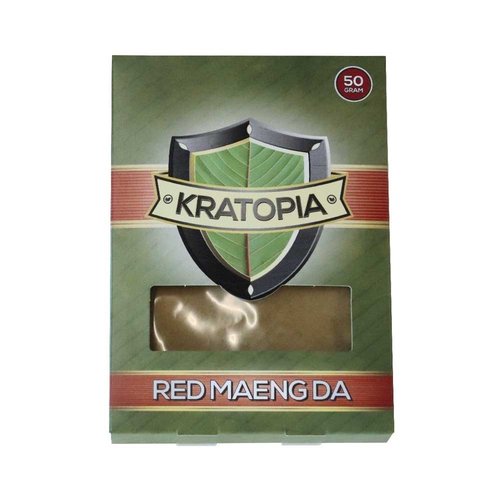 Red Maeng Da is known as the most powerful Kratom. It contains many psychoactive alkaloids that cause both physical and mental effects. According to various studies, this kratom, like all Maeng Da varieties, has interesting benefits. But it must of course Read more

Ordered before 16:00, delivered tomorrow.
You still have 00:00:00 hours to complete your order.
Product description
Description
Kratopia Red Maeng Da Kratom
Red Maeng Da is known as the most powerful Kratom. It contains many psychoactive alkaloids that cause both physical and mental effects. According to various studies, this kratom, like all Maeng Da varieties, has interesting benefits. But it must of course be used with care.
More information about Red Maeng Da Kratom
The use of kratom has been around for centuries in Asia. However, the Maeng Da variety only emerged at the end of the 19th century. Then some Thai farmers were looking for a kratom tree that could withstand the warm and humid environment in Thailand. By grafting several species, they got the Maeng Da.
The red color is created by not only drying the leaf, but also allowing it to ferment. According to Indonesian scientist Slamet Wahyono, who has been doing kratom research for years, it has numerous beneficial effects. With the red Maeng Da you can even think of lowering blood pressure and reducing symptoms in diabetes. But it is also used as a means to stimulate appetite or improve sleep.
Usage:
Prepare a cup of tea of ​​this herbal preparation by dissolving 4 to 5 grams in boiled water 70 – 95 degrees. Recommended time to draw is between 3 to 5 minutes. The tea does not need to be filtered, everything can be consumed.
Warning:
Sale and use under the age of 18 not permitted. Keep out of reach of children. Do not use in case of high or low blood pressure, heart and/or lung complaints, diabetes, pregnancy, when using medication, drugs or alcohol.
Dosage:
In addition to your own body weight and sensitivity, the dosage also depends a lot on the strength of the kratom. Normally, 5-10 grams of dried leaves should be enough for inexperienced users. The dosage can be slightly lower with kratom powder, which is usually stronger than regular leaves (3-5 grams). The same goes for extract. Kratom is not addictive when used responsibly and no more than once or twice a month. More experienced users will feel the need to increase the dosage after some time.
Kratom in higher doses tends to have sedative effects, regardless of which strain is used.
Mild Effect: <3 grams
Fair/Good Effect: >3-5
Strong Effect: >5-6 grams
Definition:
Kratom has a strong effect on your mood and energy. It reduces fears, while the feeling is described as happy, strong and active, with a calm mind and a strong will to work. Thai workers use it to get through the working day. The effects are felt after 5 to 10 minutes and can last for several hours. Most people call the effects stimulating and euphoric at a low dose and sedative at a higher dose. This can probably be explained by the fact that mitragynine stimulates the delta opiate receptors in small amounts, but as the dose increases, the more and more the mu-opiate receptors stimulate.
Although the main alkaloids in kratom are related to psychedelic substances, kratom does not appear to have psychedelic effects. The main effects are similar to those of opiates: analgesic and cough suppressant, but also narcotic and euphoric. These effects are approximately comparable in strength to codeine. Some sources claim that kratom, like other opiates, increases sexual desire in women and can reduce erection problems in men.
The positive effect of mitragynine on mood and a reduction in anxiety are probably responsible for this. Other effects of mitragynine include decreased muscle tone, local anesthesia and central nervous system depression. Direct negative effects can include dry mouth, increased urination, decreased appetite and constipation. Unlike opiates, mitragynine usually does not cause nausea or vomiting. Intensive use can result in a mild form of lethargy.
Kratom is not a medicine, but it has a positive effect on things like:
– Restlessness
– Improved concentration
– Energy shortage
– Insomnia
– Pain relief
– Reduction of “craving” in addictions
Close
Compare products
0
Start comparison